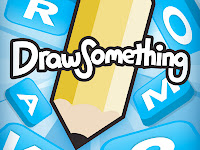 Here is my latest addiction and HUGE distraction...has anyone fell into the powerless grip of this game?  I used to think I could draw... nope, not even a little bit.  Also, I must have the fattest finger ever.  I'm currently playing about 70 million people right now with no stopping point in sight.  It started with Words With Friends then Hanging With Friends now I draw stick figures all day long!!!  The worst is when it is your turn to guess said drawing... only to see that the "artist" has spelled out the word after many failed attempts.  I literally had to place my phone on the table across the room so that I could sit down and focus on a new blog post!  I feel naked and lost with out my phone and I know someone has guessed my drawing.... so I know that it is my turn times at least 8.  Also I struggle with content I want to add that does not belong here.  Design DNA may make a comeback soon enough. Alright, raise your glasses to chapter 5 - please remember the tab next to "home" will house the story from beginning to end.

Drea was drawn to his familiarity.  His black almond shaped eyes, intense and comforting which should have terrified the young girl kept her close.  It wasn’t until after Draden successfully planted his seed did Drea begin to put the pieces together.  The beginning phase of his plan was right on schedule so there was no need to carry on with the absurd courtship.  Drea’s intoxicating romance was unexpectedly extinguished while her now changing body would forever be a lingering shadow of her happiness’s sudden and mysterious demise.  He became extremely cold towards his young bride violently draining her spirit, bringing her back to the life she thought she had left behind.  Draden left her emotionally abandoned and physically exhausted and once again a prisoner of her own home.
Her only escape was the short hike to town which never went unsupervised.  Their intense stares pierced through her like sharp daggers as she walked through the island.  Though for no honorable reason, Drea had often become the topic of conversation.  She could hear their whispers through the wind as the island women concocted stories of Drea’s position in Draden’s world.  It was evident to Drea of her Husband’s arrangement with many of the towns’ women.  Their jealousy and hatred towards her made it incredibly difficult to maintain meaningful friendships; leaving her sad and lonely.  Every trip made away from Draden’s lair, Drea became more aware of her increasingly dangerous predicament.  Although obviously alone amongst the towns’ people, she felt as though something was trying to pull her from the corrupt environment.
The whispers had returned; this time leaving her unable to translate the soft hissing.  Time and again she checked over her shoulder, sure someone was there.  Since meeting Draden, she was less connected to the sounds of the wild.  Recent reminders proved to be both hopeful and depressing.  How could she have forgotten who she was?
Drea slowly walked down the main strip of the village.  She passed several boutique windows taking in all of their contents.  Unintentionally making eye contact with one of the sales associate she nodded, smiling warmly.  The women in the window dressing her mannequin for the new season half smiled back at Drea.  Realizing who was looking back at her the woman raised her nose slightly and flashed Drea a dry smile.  Although deeply disliked in the town, Draden made sure Drea dressed well.  Which meant, fake or not, the shop owners played nice as to keep Drea coming back.  She peered past each display and watched the people.  Imagining herself as a part of each family.  She was the happy daughter excited to buy a new dress with her mother.  She was the proud mother helping her daughter pick out wedding dresses.  She was the best friend buying drinks and appetizers.  Reaching the last store, she ran out of windows to escape in.  Drea crossed the street, pulling her sweater closed as she caught a chill.  She would repeat the same game on the opposite side of the street peering into the lives of the villagers.  Reaching the first store she caught a reflection of someone walking beside her.  He was only a few inches taller than she.  Light hair and light eyes she thought.  It was so fast.   Drea looked to her side to see nothing but empty space.  Perhaps she had enough walking for the day.  The sun was a sliver in the distance causing the lamp posts to turn on, lighting her path down the strip.  The air was becoming cooler as the sun disappeared.  Drea hugged herself rubbing her hands up and down her arms for warmth.  She widened her strides as to pick up the pace.  She turned the corner colliding into the arms of Detective Randy Creston.  “Oh! Excuse me!” Drea said in a startled voice.  “Drea, are you ok?” Detective Creston glared down at Drea with a cocked eyebrow.  “I’m fine Randy.  I’m sorry, I wasn’t paying attention.  I guess my head is elsewhere.” She shrugged at the detective holding herself tighter.  “Well it’s getting cold, you should get home Drea.”  The Detective squeezed her arm lightly, turning the corner.

Email ThisBlogThis!Share to TwitterShare to FacebookShare to Pinterest
Labels: Chapter 5